Office Phone Headset Rentals for as little as $6 per month!

Enjoy the comfort and extreme mobility that comes with use of a corded or cordless headset with your office telephone! END_OF_DOCUMENT_TOKEN_TO_BE_REPLACED

In my 30 + years in the telecommunication industry, one problem I have seen consistently are issues related to drop calls and voice quality.

So let’s take a look at the causes and some solutions.

In in the 2020’s by and large the most common cause of dropped calls that my company has seen are due to problems with older phone systems that still are using copper phone lines or similar. Such problems existed  in 1920’s and still do in  this decade of the 2020’s.  In recent years problems with calls originating to or coming from cell phones have increasingly been contributing to problems with dropped calls.
One of the ironies of the dramatic improvement in cell phone service quality is that since one can rarely tell when another party is on cell phone or a  landline or VOIP line resulting landline or VOIP carriers getting the  blame for dropped calls that are in fact caused by cell phones.  The slight upside to this is that folks these days are less likely to assume  an abrupt end to a call is a deliberate act on the part of the caller.

Other causes of dropped calls include:

c) user error, in which case it becomes an “accidental or deliberate disconnect” and not a dropped call.

f) problems related to a firewall. router or cabling issues or other IT issues.

On  VOIP systems however.., these problems along with sound quality issues most times are not due to phone carrier carrier  or issues with the phone carrier equipment ( including phones) but  one of 3 things;

The best way to avoid dropped calls and sound quality issues is through the use of the modern business telephone system.

On older phone systems, if a component is about to go bad  dropped calls would be one of the problems one could experience.  If it is not a problem with the systems components  things that will cause a call to drop on a modern “land-line” system include a loss of electrical power and carrier issues. Switching to a VOIP system improves greatly the chances of this not occurring – but does not eliminate completely the potential for this problem to occur

So, what to do when you experience a dropped call:

If over  a period of several months you continue to experience dropped calls on a regular basis, consider changing local phone or internet service carriers.  Most often  however today’s carriers are very good at identifying  and fixing these issues.  As bothersome as these things are be  patient with your phone or internet carrier since it may take several reported incidents before they can clearly identify  and get a handle why this is happening.

If  ongoing  issues with dropped call  is getting especially frustrating – hang in there!  A solution can almost always be found! In the meantime consider taking a break and firing up a Jimmy Buffett tune on your computer or smartphone  until things finally get resolved!

Problems with dropped calls have been around the since the days of Alexander Bell. As good as our modern communications infrastructure is, I don’t expect them to go away anytime soon.  Take the advice I’ve given you here, and you’ll find the problem to be less pervasive, and frustrating.

How to Deal with those Pesky Vendor & Supplier Phone Calls

Posted by cataccess on Friday, December 15th, 2017 in Uncategorized

Many business owners have a love-hate relationship with the vendors and suppliers their company relies on to keep things running smoothly – count me as one of them.

On one hand, when I need one of these companies I want to them to:

On the other hand when I feel I don’t need them, I really would rather not hear from them.  Except, I also understand that many times while I may not feel I need to speak to them, they may have information that is in my company’s best interest to know about.

So as busy as we all are, here are several effective methods for managing unsolicited calls from vendors/suppliers in a way that keeps you properly informed while not becoming a drag on your time:

I am also big on having a proactive relationship with my vendors and suppliers, which helps my company keep costs down while taking preventive measures to avoid major problems and expenses.

Bottom line: The relationship between a company and its vendors is a bit of a dance, but when it works well everyone is happy; when it doesn’t work well, everyone loses.

What are your thoughts on this subject? Do you have tips, suggestions and comments to add? If so, I would love to hear from you.

How to Protect Your Phones & IT Equipment During a Hurricane

Especially during hurricanes and tropical storms, many companies spend unnecessary amounts of money recovering from lightning and other storm related power surges, any of which can fry equipment beyond repair, rather than a much smaller amount to avoid equipment damage altogether. 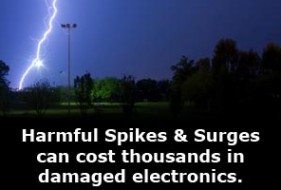 To help ensure that your phones and other related equipment remain undamaged by hurricane-related surges, here are some tips that might help: